Home » Knowledge Base » LTG » The ramifications of extrapolations

The current low yield environment and a market consistent approach to regulation has exposed the balance sheet of many insurers and pension schemes offering long dated guarantees. The problem is particularly acute where the duration of assets and liabilities is mismatched, and solutions are now being sought to modify the valuation method of these long-dated liabilities to address the problem. In this article, Ross Evans, Neal Hegeman and Emily Penn at the Insurance and ALM Advisory team of RBS discuss the potential implications of these modifications.

Despite the continuing uncertainty over Solvency II, a number of insurance company and pension fund regulators in Europe have introduced significant changes to the methodology for valuing liabilities. These changes – which are a move away from pure market consistency – have, in part, been made to protect the solvency positions of insurance companies and pension schemes. In Europe, the assets held by many insurance companies and pension schemes are shorter in duration than the long-dated liabilities they are backing. Coupled with this, the regulators in several European countries prescribe a market consistent valuation of the balance sheet. Declining interest rates have therefore resulted in weakening solvency positions for insurers and pension schemes running this type of asset liability mismatch. This, in turn, has triggered increased hedging activity to protect against further declines in interest rates. The increased demand for hedging puts further downward pressure on rates, exacerbating the pressure on solvency positions and funding levels. To put the brakes on this negative feedback loop, Danish, Dutch and Swedish regulators have taken action. They have responded by adopting a key element of the current Solvency II negotiations – the extrapolation of the long end of the risk-free interest rate curve. Extrapolation of the curve gives higher and more stable long term interest rates for valuing the long-dated liabilities of insurers and pension schemes. This move away from market consistency has profound implications for the hedges required to stabilise solvency, as well as having knock-on impacts for the dynamics of the Euro swap market.

Since the publication of the draft specifications for the QIS5 exercise, Solvency II proposals have included a method to extrapolate the risk-free interest rate curve to an assumed “Ultimate Forward Rate” (UFR). This extrapolation is applied to forward rates rather than spot rates. [caption id="attachment_83732" align="alignright" width="281"] 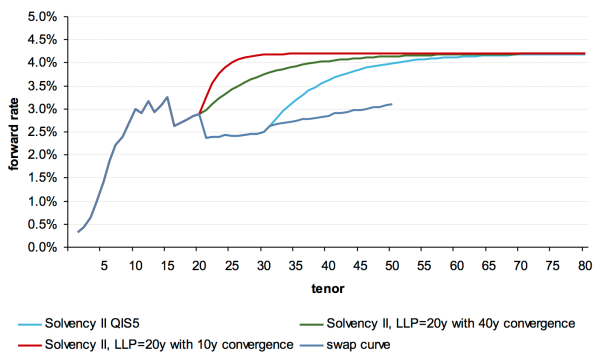 Figure 1a: Impact of extrapolation on forward curves[/caption] The extrapolation of the curve commences at a pre-defined “Last Liquid Point” (LLP) and converges to the UFR over a number of years. The choice of LLP should, in theory, reflect the point at which the swap and government bond markets cease to have sufficient depth and liquidity. This will obviously vary by currency. For the QIS5 exercise, the LLP was set at 30 years for Euro (EUR) and 50 years for British Pound (GBP). The LLP for EUR has been shortened to 20 years in the current draft version of the Level 1 text (“Omnibus II”) and is the base case scenario within the “Long-Term Guarantees Assessment” (LTGA). The length of the convergence period from the LLP to the UFR has been a topic of fierce debate and it is also being tested within the LTGA. The European Commission and European Council propose a 40 year convergence period, while the European Parliament favours a shorter period of just 10 years. In addition, the level of the UFR also differs by currency. For EUR and most other major currencies it is pegged at 4.2%, based on long-term assumptions for inflation and real rates of 2% and 2.2% respectively. For JPY and CHF the UFR is set at 3.2%, reflecting lower long-term inflation expectations. [caption id="attachment_83731" align="alignright" width="292"] 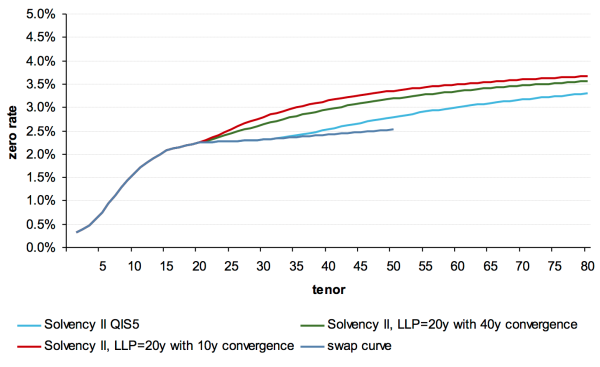 Figure 1b: Impact of extrapolation on spot curves[/caption] Figures 1a and 1b show a graphical illustration of the impact of the extrapolation on the EUR swap curve. The extrapolated curve is noticeably higher than the swap curve for maturities beyond the LLP. Generally speaking, a shorter LLP and faster convergence period will mean less interest rate hedging as a greater part of the liability discount curve is pegged to the fixed UFR. The Solvency II method of extrapolation has attracted wide publicised criticism: The dependencies on the 15 and 20 year points of the curve are illustrated in Figure 2. This shows the portfolio of interest rate swaps needed to hedge a typical Dutch pension scheme on both an economic basis (where we discount cashflows using the market swap curve) as well as the Solvency II basis (where we discount using the extrapolated curve). [caption id="attachment_83749" align="alignright" width="285"] 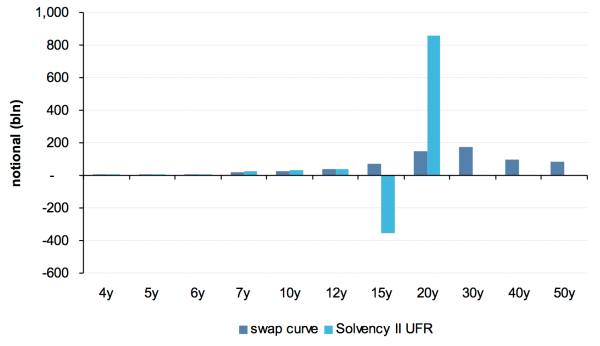 Figure 2: Swap portfolio required to hedge typical Dutch pension scheme under economic and Solvency II discount bases[/caption] DNB modified version of the UFR In order to tackle these issues, the Dutch regulator (DNB) has introduced, for its pensions industry, a modified version of the Solvency II extrapolation. In particular, the DNB approach takes some account of market swap rates beyond the LLP, rather than discarding them completely, as in the Solvency II method. As we see from Figure 3, this rather elegantly deals with the issues highlighted above: The overall sensitivity to interest rates is not very different from that under the Solvency II version of the curve. However the sensitivities to the different points on the interest rate curve are noticeably different, and crucially much closer to that witnessed when we discount liabilities using the full market swap curve. Pension schemes are not captured by Solvency II, but in September 2012 this modified version of the extrapolated curve was introduced for Dutch pension funds. The Dutch insurance industry will, however, be regulated under Solvency II, and so in anticipation of the forthcoming regulatory regime, the extrapolated curve without modification was implemented for Dutch insurers in July 2012. The consequence of this is that Dutch insurers will not require any swaps longer than 20 years. Dutch pension funds, regulated on the modified curve, will require a certain amount of swaps longer than 20 years. However, this requirement is noticeably less than that required under a true market consistent basis. Observed EUR market impacts Dutch and Danish insurers and pension schemes have traditionally been the dominant players in the long-end of the EUR swap market. Dutch pension funds in particular have liabilities in the region of €900bn, with an average duration of 19 years. Danish pension funds, regulated under the UFR, account for circa €200bn of liabilities with an average duration of 13 years. To put these figure in perspective, according to statistics compiled by the OECD for 2011, Dutch and Danish pension fund assets accounted for 36% and 20% respectively of total Eurozone pension fund assets (incl. Denmark), over half the total market share. Thus, a change to the risk-free interest rate curve for the regulatory balance sheet of insurers and pension schemes in these countries will have profound impacts on the dynamics of the EUR swap market. [caption id="attachment_83733" align="alignleft" width="282"] 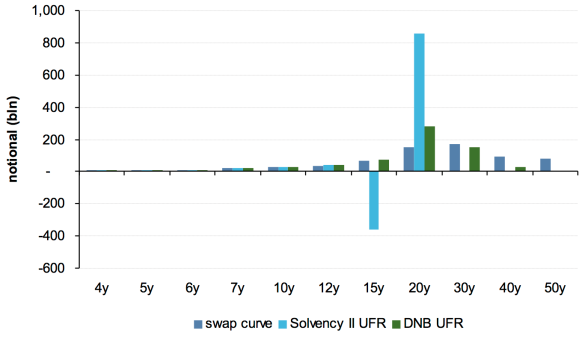 Figure 3: Impact of DNB modification on swap portfolio required for typical Dutch pension scheme[/caption] As demonstrated in Figure 3, the impact of extrapolating the risk-free interest rate curve is, on an aggregate level, a reduced sensitivity to interest rate movements, meaning fewer interest rate swaps needed for hedging the regulatory balance sheet. Additionally, it implies less, or no, exposure to movements in long-end rates beyond 20 years and an increased sensitivity to the 20 year point. This means fewer long-dated (>20y) swaps are needed but proportionally more 20 year swaps. The latter effect is less pronounced under the DNB modified version of the Solvency II curve where there remains some dependency on market rates beyond 20 years. Based on this analysis we might expect insurers and pension schemes to both shorten the duration of their interest rate swap hedge portfolios and reduce them in size, and indeed this has been the general pattern observed in the market. [caption id="attachment_83961" align="alignright" width="252"] 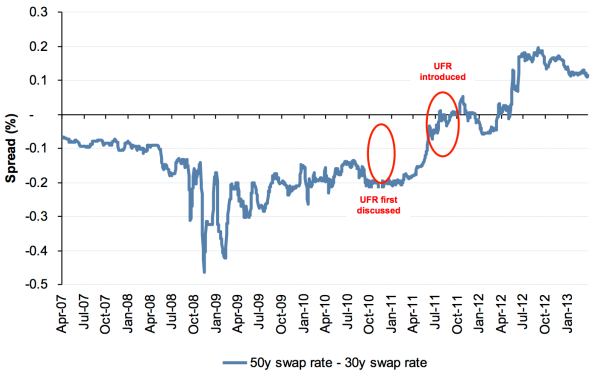 Figure 4: Slope between 30 and 50 year points on EUR swap curve[/caption] The Danish regulator introduced the Solvency II extrapolation method for Danish pension funds in early June 2012. And, as mentioned above, the Dutch regulator announced a similar method for Dutch insurers in July 2012 and followed with the modified version for its pension industry in late September that same year. These announcements have driven a material steepening in the long-end of the EUR swap curve.  This is demonstrated in Figure 4, which shows the difference (or the “slope”) between the 30 and 50 year points on the EUR swap curve. The bulk of this steepening occurred prior to September 2012 in anticipation of the introduction of a Solvency II type risk-free interest rate curve for Dutch pension funds. However, not everyone has reduced and/or shortened their interest rate hedge portfolios to the full extent implied by the analysis above. This may be because they still have an eye on the economic risk (i.e. liabilities valued on the market consistent swap curve) rather than being driven purely by the regulatory risk (i.e. based on the extrapolated curve). Also, Dutch pension funds are not allowed to increase their economic risk profile by unwinding hedges if they are underfunded, which held true for many Dutch pension funds in 2012.

Not an issue for Sterling? A word of caution…

Lobbying from the UK insurance industry to date has focused on the Matching Adjustment, leaving mainland Europe to fight out the debate on extrapolation. This is understandable given the relatively small volume of GBP liabilities beyond the 50 year LLP currently proposed for GBP. The 20 year LLP for EUR has been written into the draft Level 1 Directive. But for other currencies, EIOPA has the power to set the LLP within the Level 2 measures using a “holistic and consistent approach” to that used to justify the use of a 20 year LLP for EUR. This leaves a residual risk that the methodology determined by EIOPA to justify a 20 year LLP for EUR will imply an LLP for GBP that is shorter than the current proposal of 50 years. If a shorter LLP was enforced for GBP, the issues around extrapolation of the risk-free interest rate curve would suddenly become very important for the UK industry. At present, the assets of UK insurance companies are generally well matched to their liabilities. A shorter LLP could therefore force many of these insurers to unwind their long-dated interest rate swaps. Whilst the extrapolation beyond a LLP is intended to allow the Solvency II framework to cope with long-dated guarantees, there are also some potential unintended consequences. Not only might it alter the dynamics of the long dated swap market, but it may also disincentivise insurers and pension schemes from investing in long-dated, fixed income assets. — The views expressed are the authors’ own. 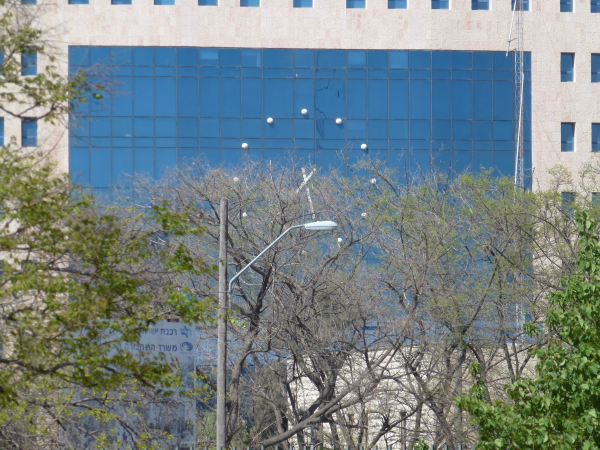