For the past year participants in the Solvency II Wire Regular Meeting Groups (RMGs) have been asked to rank the level of Solvency II activity in their own work (Home score) and that of their organisation or the market, as they see it (Away score). The score is on a scale of 1-10, where 10 represents 100% of the time spent on Solvency II. 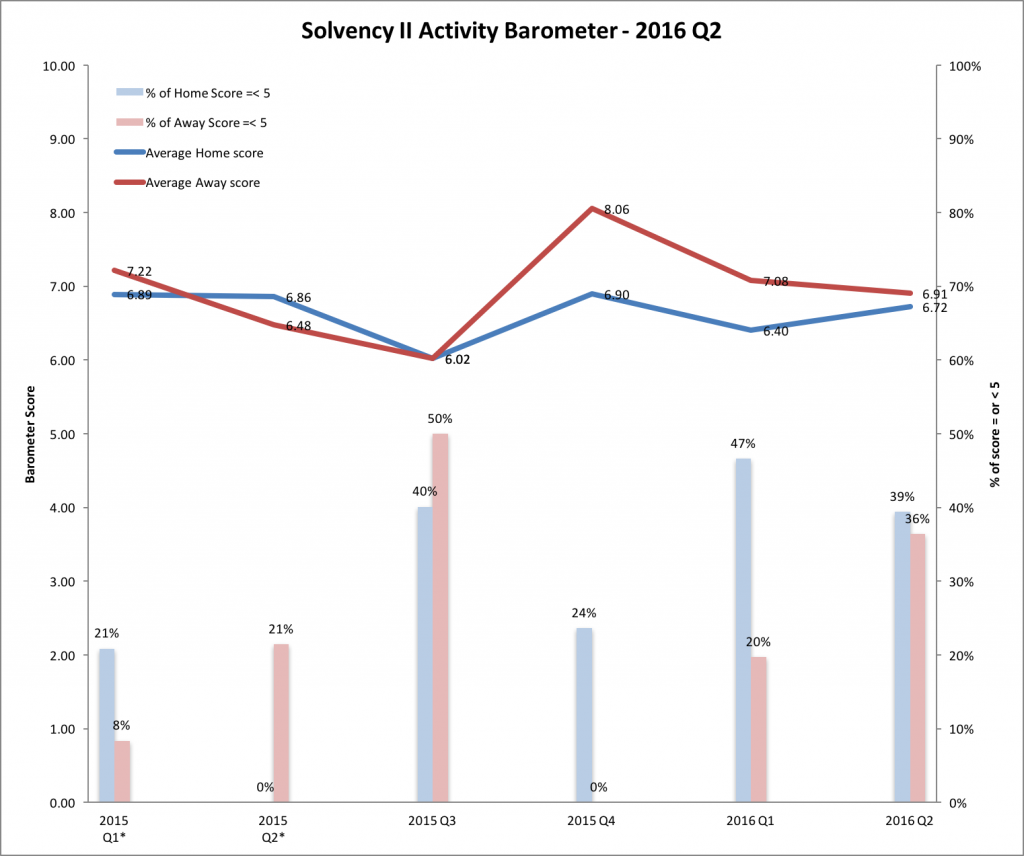 The chart shows quarterly figures for three metrics: average Home score, average Away score and percentage of scores of five or less (Home and Away). The downward trend of the Away scores continued in the second quarter of the year, while Home scores have picked up as the two measures continue to converge at an average slightly higher than the same time last year. The percentage of scores below 5 are also converging at just below 40% for each meeting.

The most significant event in 2016 Q2 was going to be the submissions of Day 1 reporting on 19 May, by all undertakings, and the first quarterly filing for those solo undertakings falling within scope on 26 May. But the results of the UK referendum to leave the EU caught most firms by surprise and will have a significant impact moving forward.

The ‘Leave’ vote is a seismic change in the landscape that may well reverberate across the globe. In the UK it has cost David Cameron his premiership and leaves a bitterly divided nation, a fragile ruling Tory party and the Labour opposition in disarray. Europe was clearly shaken but hardly stirred by the decision. Opinions vary from great sadness to “if you want to go, goodbye then”. Speaking to both officials and industry in Brussels last week, one thing is clear: there is little understanding that the root causes of the “Leave” vote are economic. The UK’s austerity politics pitted lower income workers against European migrants, competing not only for jobs but also for heavily under resourced social services. Whether Europe learns these lessons remains to be seen. The impact of Brexit on Solvency II will largely depend on the negotiated settlement that is agreed (see Brexit – UK to seek Solvency II equivalence? for further details). Once Article 50 is triggered by the UK government (this could take as long as one year if various legal challenges are successful) the EU and UK have two years to negotiate a settlement. However, the wording of Article 50 is such that the negotiation will only relate to the exit from the EU and not the nature of the new relationship, or “model for cooperation” as officials like to call it. Until these negotiations are concluded the legal status of Solvency II, along with all other EU regulations, remains unchanged. What is clear is that uncertainty will remain for quite some time.

Reporting continued to dominate the agenda of insurers and asset managers for most of the second quarter. This fact was also reflected by corporate social media activity, with asset data reporting taking the lion’s share of the traffic. Overall, the first reporting cycle appears to have progressed as planned without any major incidents. It is worth considering that, for the most part, NCAs were able to accept the data as reported, although this may be at the expense of the quality of the data in some cases. A number of insurers and asset managers acknowledged the need to improve data quality and accuracy in subsequent reporting cycles. Some insurers are now turning their attention to the first annual reporting next year (20 May 2017 for solo and 1 July 2017 for groups), which will include the first set of narrative as well as public disclosures.

Firms are also becoming more aware of the challenges and implications of reporting on a regular basis. Participants at the April RMG expressed concerns about the relation between Solvency II and other reports. For example, some highlighted the need to manage any contradictions between data in the Solvency II reports and data published in other reports and accounts (using Solvency I data). It was also reported that Boards are not yet sufficiently familiar with the new Solvency II reports. It will take time until they get comfortable with the new figures, fully understand their implications and have the right expectations.

Firms are beginning to pay more attention to the implications and challenges of public disclosure and the need to satisfy a range of different audiences in the Solvency and Financial Stability Report (SFCR). Achieving the right balance between allowing each firm to report in a manner appropriate to its circumstances and enabling valid comparisons to be made between different firms, were listed as some of the main challenges in RMGs during the quarter.

One encouraging emerging trend is that firms are starting to see some of the benefits of the reporting requirement. At the April RMG it was remarked that reporting was bringing more rigour to insurers’ internal processes and created opportunities to build regular Solvency II reporting requirements into internal management information and risk monitoring. The need to automate and streamline the process is encouraging insurers to review and improve their overall reporting processes and data governance. This is especially driven by the demands of asset reporting.

The challenges of updating existing agreements to make them Solvency II compliant were addressed in the May RMG. Investment management, outsourcing and reinsurance agreements that were based on Solvency I have no specific provision for Solvency II. For example, there is no specification on how to convert mathematical reserves into technical provisions under Solvency II because they are calculated on a different basis. Similarly exiting contracts will have to be revised to insert specific terms to make them Solvency II compliant (for example, governance of outsourcing agreements), as there are no grandfathering or transitionals to allow for this. There are some reports of uncertainty on equivalence of other jurisdictions leading to repatriation of some reinsurance contracts. Legal uncertainty is also arising around asset and reference data. It is not clear, for example, if a regulator requires data from regulated entities can also dictate commercial terms.

The cost of “pass-through” data, data that asset managers and various third parties have to pass through to insurance clients, is becoming a hot topic. Concerns about data costs in Solvency II were flagged up quite some time ago (see Look-Through Symposium & Solvency II Wire Quarterly 2016 Q1). More recently it has emerged that rating agencies were asking for additional fees from third parties (e.g. asset managers) who were providing Credit Quality Step (CQS) data to insurance clients. The CQS are based on external ratings used for SCR calculation and QRT reporting.

Insights from the Thomson Reuters Solvency II Diagnostics tool (disclosure: Solvency II Wire and Thomson Reuters have entered a commercial agreement to share anonymised aggregated data from the tool). The current sample consists of close to 220 insurers, asset managers and providers of data based in Europe, and includes data collected up to the end of the second quarter of 2016.

58% of insurers surveyed in 2016 Q2 said they believed they were ready for Solvency II; relatively little change from firms surveyed before the start of the year (61%). However, the portion of firms that believed they were not ready rose to 16% from the pre 2016 sample average of 10%. The figures for the ORSA remain consistent with last year. 68% of newly surveyed firms said they conducted an ORSA. Almost all new survey participants said they had their ORSA approved, a significant increase from the sample average of 40%.

There was a significant rise in the second quarter in the portion of insurers that said they had an audit process in place to verify and validate the QRT reports (up to 52% from 31% before 2016). A similar rise was noted for asset managers. The proportion of asset managers surveyed in the second quarter who said their clients had not requested any audit information dropped by almost 50% compared to pre 2016 figures.

The general state of readiness of the sample in the second quarter of the year remains consistent with previous data. The fact that most of the sample had their ORSA approved is an encouraging sign, probably reflecting increased supervisory activity since the start of the year. This is also reflected in the increase in data audit reported for the quarter and the substantial increase in insurers asking their asset managers for the data audit. The rise in confidence of asset managers’ understanding the EIOPA data may reflect the growing demand they have been experiencing from insurance clients to provide the data. It is expected that the understanding will continue to increase over time.

A Solvency II Wire survey has revealed that as of 1 January 2016 there were only about 95 insurance and reinsurance undertakings with an approved Internal Model (IM) or Partial Internal Model (PIM) across Europe. The survey of 25 Member States plus Norway, Iceland and Gibraltar (information from 20 NCAs showed a marked reduction from the number of firms in Internal Model Pre Application (IMAP) surveyed in 2014. [gview file=”https://www.solvencyiiwire.com/wp-content/uploads/2016/07/Internal-Models-in-Europe-3-4-2016.pdf”]
Further details of the requirements and intentions of each Member State are available on the Solvency II Interactive Implementation Map.

The Solvency II Wire Quarterly is a new initiative and we would be very keen to get your feedback on this new initiative. Click here to email the editor directly. 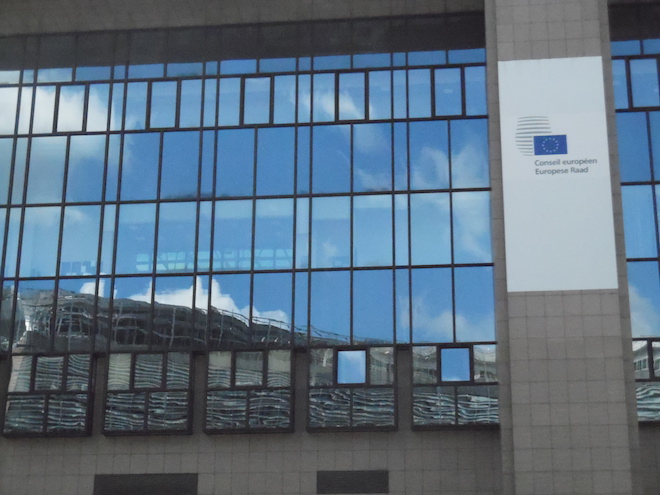