On 2 October 2013 the European Commission published a legislative proposal for a second “Quick-Fix” Directive changing the application date of Solvency II to 1 January 2016. The deadline for transposing the rules into national law has been shifted to 31 January 2015. The current Solvency II implementation date is 1 January 2014 and the transposition date is 30 June 2013. The new directive will also postpone the repeal of the existing rules (Solvency I) to 1 January 2016. In a statement, Commissioner Michel Barnier said, “An agreement between Council and European Parliament is within reach. But it will not be possible to publish the Omnibus II Directive in the Official Journal before 1 January 2014.”

Reasons for the delay

The dates have to be changed to prevent a legal vacuum given the delays in finalising Omnibus II (an amending directive to Solvency II) and to allow supervisors and firms sufficient time to prepare. According to the legislative proposal (COM (2013) 680; proposal test begins on page 7), “In order to avoid overly burdensome legislative obligations for Member States under Directive 2009/138/EC [Solvency II] and later on under the new framework envisaged by the Omnibus II proposal, it is appropriate to postpone the dates for transposition and application of Directive 2009/138/EC.” The date changes were widely anticipated given the stalled trilogue negotiations last autumn. Details of the Commission’s intention to shift the deadlines were first revealed by Solvency II Wire in October 2012.

“For the last time”

The Commission is keen to reach an agreement on Omnibus II and has been reluctant to introduce a second “Quick-Fix” Directive despite a request from Member States earlier this year (Solvency II Wire 27/5/2013). In an Explanatory Memorandum preceding the legislative proposal the Commission stressed that the dates will be moved “for the last time”, reflecting the ambition of all trilogue parties to complete the process (Solvency II Wire 25/9/2013). “The parties to the on-going legislative negotiations have agreed that there should be no further changes to either the transposition or application dates during the Omnibus II negotiations in order to ensure legal clarity for insurance and reinsurance undertakings [and] supervisory authorities during their preparations,” the Memorandum states. The proposed directive text itself (which comprises only three Articles) makes no reference to this “last time”. However, the validity of such a commitment is both questionable and highly unusual. According to Chris Finney, Partner at law firm Edwards Wildman, “The Commission can’t make the trilogue parties agree, and it can’t make EIOPA, the Parliament and the Council do what they need to do to complete the new regime. It’s therefore making a commitment without having the wherewithal it needs to deliver.” “The delays that have already accrued have damaged the Commission’s reputation. Making and then breaching a ‘one last time’ commitment can only damage it further,” Mr Finney added.

Based on the proposed new dates and the assumption that an agreement will be reached in trilogue, the legislative timetable may progress as follows: 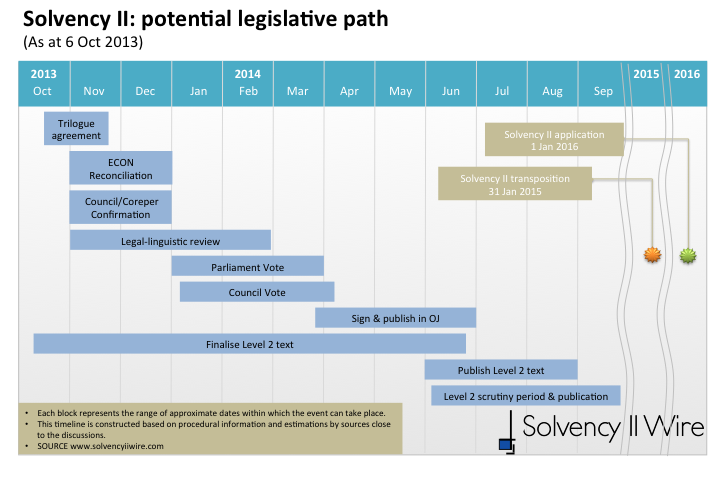