[/caption] There will not be a full QIS 6, according to Carlos Montalvo, Executive Director, EIOPA. Speaking at the 1st EIOPA Conference in Frankfurt, Mr Montalvo said. “There is not going to be an EIOPA launched and run full QIS 6 excise. There are going to be, in different national supervisory authorities together with industry, initiatives which may very well be called QIS6 … but they are not going to be a newly run and directed EIOPA full QIS exercise.” He did not specify in which countries these exercises will take place or what their scope will be. Mr Montalvo outlined some of EIOPA’s activities for next year, “What we are going to do in 2012 is some ad hoc testing of some of the issues that are going to be decided at the Level 2,” he said. “We think it is extremely important and it is part of smart and good regulation to test things that are going to be operating.” Mr Montalvo also said that once Solvency II was launched more work will have to be done. “Solvency II is great, it is very good but it is not perfect. And it will not be perfect from day one.” He added that the regulator must have the courage to improve those areas that are found lacking once Solvency II is in place. [caption id="attachment_3760" align="alignright" width="360" caption="Euro Finance Week 2011, Frankfurt"] 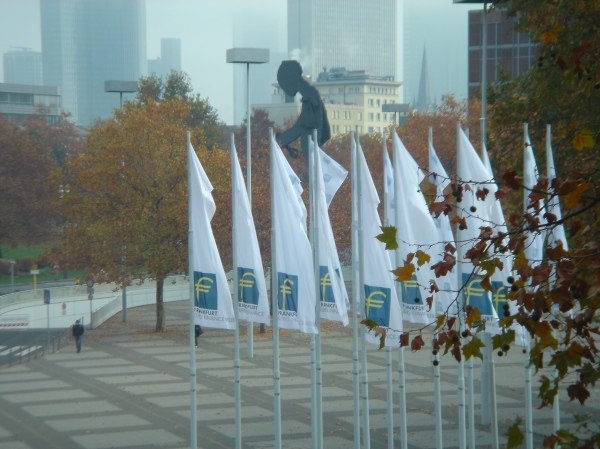 [/caption] At a press conference held later that day, Gabriel Bernardino, Chairman of EIOPA, said that the effects of the sovereign debt crisis have been “manageable” for the European insurance industry so far, and that EIOPA was closely monitoring the situation. He also stated that the proposed 50% haircut on Greek sovereign bonds would be “manageable” for the European insurance industry. “You need to take into account, for example, that many of the insurance companies have already taken these write downs [on Greek bonds] in the previous quarters so on this particular case the impact will not be huge,” Mr Bernadino said. EIOPA estimates that the industry’s exposure to Greek sovereigns was about €20 billion – less than 1% of its total asset holdings (about €5.5 trillion). Speaking of the future of EIOPA, Mr Montalvo said the organisation’s powers may be extended following a review of its activities by the European Parliament in 2013. Currently EIOPA has 54 staff which is expected to increase to above 90 by the end of next year. EIOPA has also launched a dedicated Solvency II section on its website and a Twitter account @eiopa_europa_eu.