Agreement on transitional measures could be a key area of contention in the final discussions on the Omnibus II Directive in 2012, according to Professor Karel Van Hulle, Head of Unit Insurance and Pensions at the European Commission. Speaking at the ABI Solvency II conference (8 December 2011), Professor Van Hulle listed provisional equivalence, determining the risk-free rate curve, and a number of legal measures as “possible controversial issues” in the discussions. Provisional equivalence, also known as ‘deemed equivalence’, is a proposed measure of equivalence with Solvency II which could apply to countries other than Bermuda, Japan and Switzerland (for which EIOPA has already given equivalence recommendations). “For a number of other countries we would develop a system whereby during a transitional period of five or seven years (that deadline is still to be decided) that they would be considered as ‘deemed equivalent’ if they satisfy certain conditions.” The contention is around how closely aligned these conditions will have to be with Solvency II. While some in the European Parliament are calling for these to be “very close” to Solvency II, Professor Van-Hulle favours a more flexible approach. “[It] is important that we find a solution so that the introduction of Solvency II will not create too many difficulties for major insurance groups that work across the globe. And at the same time what we would try to do is to stimulate third countries to move in the direction of a risk based solvency regime.” Mark Hoban MP, Financial Secretary to the Treasury, told delegates that securing acceptable agreements on transitional measures was a main priority for the UK. “We have to take proper account of those third countries working towards equivalence so that UK and European firms aren’t put at a competitive disadvantage.” Other transitional measures also being considered include the treatment of hybrid capital, a gradual introduction of equity stress, the treatment of securitisation and the discount rate. There are also proposals to introduce a ‘soft SCR’ during the first year of implementation. “This will mean that a breach of the SCR might not automatically trigger supervisory intervention,” Professor Van Hulle said. Another possible area of controversy, which Professor Van Hulle listed, is the legal process to be used for the implementing measures. These can either be Regulatory Technical Standards or Delegated Acts. While this is a fairly technical legal matter, Professor Van Hulle summed up the difference as follows, “Under Regulatory Technical Standards it is EIOPA that starts the drafting, whilst in the Delegated Acts it is the Commission that starts the drafting.” However he added, “that is a more internal cuisine if you want.” 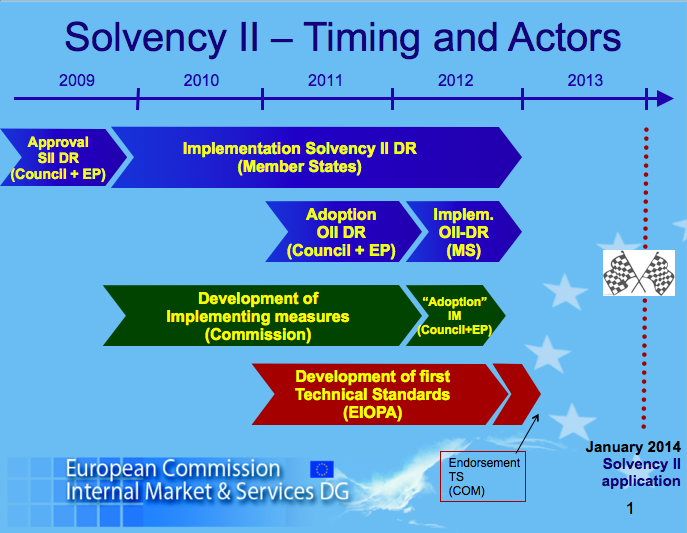