The International Association of Insurance Supervisors (IAIS) acknowledged the significance of the Solvency II framework to ComFrame, the proposed international standard for group supervision. Speaking at a press conference at the IAIS Annual Conference in Seoul on 30 September 2011, Peter Braumüller, Chair, IAIS Executive Committee, acknowledge the importance of Solvency II as a regulatory framework that is being considered by some countries outside of Europe. But he added, that the IAIS needs to think globally, “From our perspective we try to get the best system, not to impose one system from one part of the world. The IAIS aims to take the best elements from each system and put them together in a consistent, comprehensive standard.” [caption id="attachment_3489" align="alignright" width="360"] 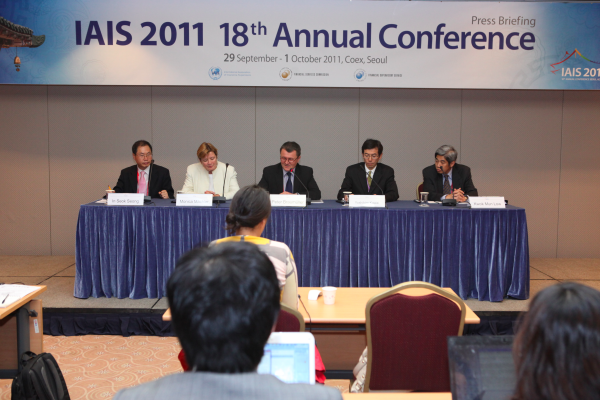 IAIS press conference, Seoul 2011, Seated from left to right In Seok Seong, Director General, Non-Life Insurance Examination Department of Korea’s Financial Supervisory Service Monica Mächler, Chair, IAIS Technical Committee Peter Braumüller, Chair, IAIS Executive Committee Yoshihiro Kawai, IAIS Secretary General, Kwok Mun Low, Chair, IAIS ICP Coordination Group SOURCE: Financial Supervisory Service of Korea[/caption] In the Overview of the ComFrame Concept Paper published in August 2011 the IAIS set out the ComFrame objectives as follows: “ComFrame serves to develop methods of operating group-wide supervision of Internationally Active Insurance Groups (IAIGs) in order to: – Make group-wide supervision more effective and more reflective of actual business practices – Establish a comprehensive framework for supervisors to address group-wide activities and risks and also set grounds for better supervisory cooperation in order to allow for a more integrated and international approach – Foster global convergence of regulatory and supervisory measures and approaches.” Monica Mächler, Chair, IAIS Technical Committee, expanded on the objectives of the framework, “ComFrame aims to enhance the cooperation between the supervisors, so they have a common language to exchange and address the results and challenges of these multinational structures and to work together to enhance the supervisory regime for Internationally Active Insurance Groups.” On the 1 October 2011 the IAIS announced the adoption of revisions to the IAIS Insurance Core Principles, Standards, Guidance and Assessment Methodology (ICP). The ICPs are a globally-accepted framework used in the evaluation of supervisory regimes under the Financial Sector Assessment Program (FSAP) conducted jointly by the World Bank and International Monetary Fund.

“The insurance sector cannot isolate itself from the policy debates on the regulatory treatment of Systemically Important Financial Institutions (SIFIs) and critical economic functions, including capital surcharges and recovery and resolution plans (RRPs),” according to a KPMG report. The Implications of Recovery and Resolution Plans, published in August, argued that the current debate on the whether insurers are systemically important is detracting from practical questions of creating recovery and resolution plans, the so called ‘living wills’, for large insurance firms. “The Financial Stability Board has made it clear that it expects some insurers to be classified as SIFIs, to be subject to capital surcharges and to be required to prepare credible RRPs,” the report said. There are a number of proposals to enhance recovery and resolution planning for SIFIs. Part of the resolution planning could include an Own Risk Solvency Assessment (ORSA) which is already being applied by a number of regulatory authorities around the world including Solvency II.