Olivier Guersent, Director General, DG FISMA at the European Commission, gave the strongest indication yet that the Commission expects to reach a positive outcome on the outstanding equivalence decisions relating to Bermuda and Japan. Speaking at the EIOPA annual conference in Frankfurt on Wednesday (18/11/2015) Mr Guersent said an announcement on the two decisions will be published in “a few months”. [caption id="attachment_1584182" align="alignright" width="339"] 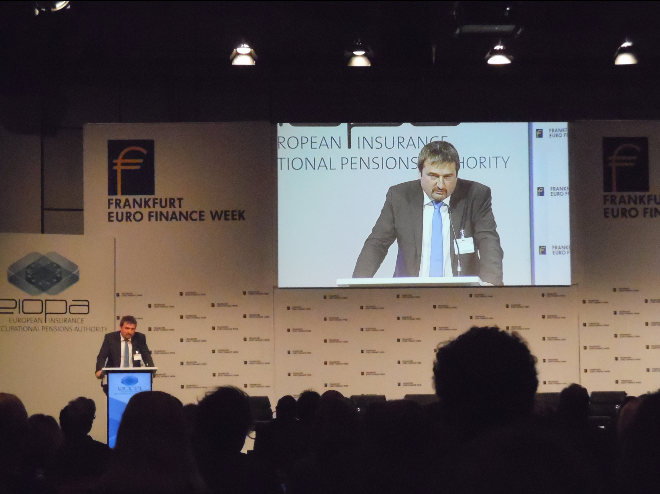 Olivier Guersent, Director General, DG FISMA at the European Commission, EIOPA annual conference, Frankfurt 2015 ©Solvency II Wire[/caption] Relating to all current pending Solvency II equivalence decisions (including those announced in June) Mr Guersent said: “I don’t think that national supervisors should actively treat non-EU countries as non-equivalent in the mean time if there is a positive Commission equivalence decision pending in EP and the Council. They should exercise forbearance in this respect. In the Commission’s view, they should certainly take into account the still draft equivalence decision. Otherwise they might take actions that will have to be reversed very shortly afterwards.” Solvency II Wire has subsequently learnt from an official source that the two equivalence decisions concerning Bermuda and Japan are expected to be adopted by the Commission around the end of November. In June this year the Commission granted six countries provisional Solvency II equivalence under Article 227; for insurers and reinsures that are headquartered in Europe and have participations or subsidiaries located outside Europe. This decision is expected to be granted pending the Parliament’s response to the objection period in December. Bermuda and Japan have applied for further equivalence provisions. Japan is applying for equivalence with respect to reinsurance only (Article 172), while Bermuda is also applying for equivalence under Article 260; for insurers and reinsures headquartered in a third country with related undertakings located in Europe.

Obtaining equivalence under Article 260 effectively means that a European national supervisor can relay on the supervisor of the group’s ultimate parent (outside of Europe) for the purpose of group supervision in that European country. But if equivalence is not obtained it would still be possible to have group supervision by the non-European supervisor if the European national supervisor is granted a letter of waiver from the (non-European) group supervisor. Mr Guersent’s comments may also refer to a recent development in which the supervisory authority of one Member State (widely believed to be the PRA) has sent out letters to some insurance groups, which are not headquartered in Europe asking them to obtain such a waiver from the group supervisor.

In his speech Mr Guersent also briefly mentioned the lack of progress on the dialogue with the USA. “I must say that I am disappointed at the delays at the start of formal discussions with the USA concerning of bilateral agreement on reinsurance,” he said. In March this year the Commission was given the go-ahead to start discussion with the USA on multilateral agreement with respect to Article 172. A number of industry sources familiar with the USA have been expressing increasing optimism that the USA will be in a position to begin negotiations before the end of the year. — To subscribe to the Solvency II Wire mailing list for free click here. [adsanity_group num_ads=1 num_columns=1 group_ids=233 /]]]>