On 10 October 2014, the European Commission adopted the text for Delegated Acts, also known as Implementing Measures. The Delegated Acts are a Level 2 text, and as such they will be binding on national regulators and do not require transposition in local frameworks.

Before entering into force, Delegated Acts are subject to an objection or scrutiny period by the European Parliament and Council, in which either co-legislator can accept or reject the text in its entirety. The objection period lasts three months from the publication date of the text, but can be extended for a further three months. Industry commentators believed that it was unlikely that the initial three-month period would be extended beyond the December deadline. On 28 November 2014, the Council published a press release confirming that it did not intend to object to the adoption of the Delegated Acts. However, in the Parliament, Sven Giegold MEP did lodge an objection to the text on behalf of the Green Party but it was rejected in a vote in the Plenary on 17 December 2014 (189 in favour; 512 against). The potential stumbling blocks to adoption of the Delegated Acts have been avoided. The recitals to the Delegated Acts mentioned a possible review of the parameters for long-term infrastructure investments before December 2018. We understand that Members of the Parliament are seeking to lobby for a review of this issue before 2018 (the Parliament’s letter to the Commission has subsequently been published). Gabriel Bernardino, EIOPA’s chairman, said in a speech in November that long-term infrastructure investments offer relatively high marginal returns on regulatory capital due to diversification benefits.

EIOPA Publications: ITS and Guidelines

EIOPA recently published a number of Implementing Technical Standards (ITS), Regulatory Technical Standards (RTS) and Guidelines consultation papers. The ITS and RTS are the so called Level 2.5 rules in the EU’s framework: they are drafted by EIOPA and subsequently require adoption by the Commission to be enacted. Like the Delegated Acts, the ITS and RTS do not require transposition into national frameworks. The Guidelines are also drafted by EIOPA. Once finalised, national regulators do not necessarily need to comply with each guideline; however there needs to be an explanation if they do not comply (“comply or explain”). EIOPA’s timetable until 1 January 2016 is crowded, and includes multiple deliveries, as  demonstrated in Figure 1. [caption id="attachment_1582695" align="alignright" width="522"] 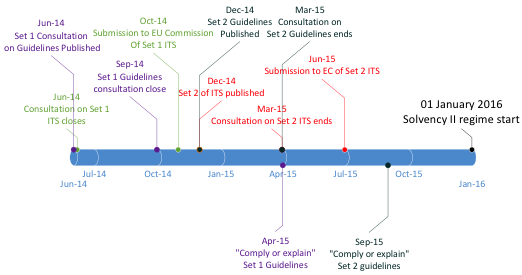 First set of ITS and Guidelines

The first set of ITS covers the application process for the following topics: The first set of Guidelines covers We note that the final reports published in respect of the closed consultations contain some important information for companies’ Solvency II preparations. For example, the Guideline on Group SCR is likely to be relevant for companies designing solutions for asset eligibility for the Matching Adjustment. Another area of interest to UK companies is likely to be the risk associated with defined benefit pension schemes. Market risk for pension schemes is included in the SCR, but longevity risk is not. The EIOPA website is not the easiest to navigate. The links for the consultations have changed several times recently, and so locating the relevant documents is not always straightforward. A summary of the key documents has subsequently been published.

Second set of ITS and Guidelines

On 1 November 2014, EIOPA published a technical consultation paper on setting the risk-free discount rate. The consultation period was relatively short and ended on 21 November 2014. It was a long paper, at 110 pages, with a significant amount of technical content. There are a few items in the paper, which are particularly worthy of comment: We note that the consultation paper contained little in the way of surprises in comparison to previous EIOPA specifications of the yield curve (such as the Technical Specification for the Preparatory Phase). There are a number of areas around discount rates where further details would be useful. For example, EIOPA has not published information on the process for updating the UFR assumptions. The Bloomberg tickers chosen to specify the UK yield curve assume that many durations are liquid (e.g. 19 years). In our experience, this isn’t always borne out and the proposed approach can produce volatile forward rates in practice. The relatively low allocation to fixed interest for the UK Volatility Adjustment may lower the attractiveness of this option compared to other options such as the Matching Adjustment.

One of the main areas of work the PRA has undertaken on Solvency II is transposition of the Level 1 Framework Directive and Omnibus II into the national framework, such as the Handbook. The PRA’s deadline for completing transposition is 31 March 2015. Another area of focus for the PRA is assessing companies’ ORSAs. Companies were expected to submit an ORSA in 2014 and will be expected to do so again 2015 to a higher standard. It appears that the PRA is closely linking the ORSA with the Standard Formula. In 2014 it started the process for reviewing the appropriateness of the Standard Formula for priority companies, which will be extended to other companies this year. The starting point for the assessment will be the ORSA. In a presentation in October 2014, the PRA stated that key areas of focus would be: Where the Standard Formula is not found to be appropriate, a number of options have been suggested. These include:

The PRA’s Standard Formula review process may be a significant undertaking for companies. While the analysis is not subject to the full requirements of an internal model, there are similarities. For example, companies may need to consider the make-up of their portfolio, and the completeness, accuracy or appropriateness of any backing data. As noted above, EIOPA have proposed that pension scheme risk be included in the market risk element of the SCR, which should reduce the number of companies for whom the Standard Formula is inappropriate. However, it is unclear whether any further adjustments will be required for longevity risk for pension schemes. A further area of uncertainty is the approach to volatility risk for with-profits companies.

It is unclear to us to what extent companies are expected to dig into the calibration of Standard Formula risks. For example, the Swiss Franc increased materially against the Euro on 15 January 2015. At one point, the Swiss Franc had increased by around 30%. This may imply that a 25% 1-year shock for currency risk, as currently specified in the Draft Delegated Acts, does not fully reflect a 1-in-200 shock.

This is a key period in the run-up to Solvency II implementation. EIOPA’s recent publication of the Guidelines and Technical Standards is a key milestone to the expected implementation on 1 January 2016. Together with the EIOPA publications earlier in 2014, much of the final framework has now been drafted. However, the scene is not static, and further changes are expected before 2018, such as the treatment of long-term infrastructure. In our view one of the significant upcoming exercises for Standard Formula companies will be the Standard Formula review. The review could potentially be quite an onerous exercise, and the extent of the investigation required remains to be seen. — The authors are consulting actuaries at Milliman. Views expressed are the authors’ own. Further Solvency II and thought leadership articles from Milliman consultant are available here. 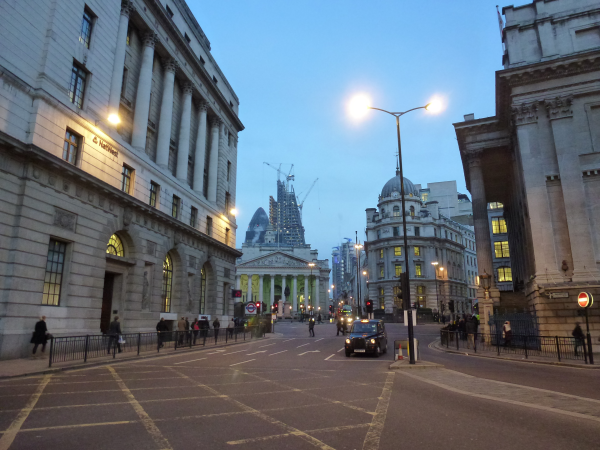